Covering a total area of 11700 square kilometers, Tsavo East National park is the largest Park in Kenya. It is located in the Eastern and Coast province across the highway from Tsavo West and south East of Nairobi.

This park is hot during some months and receives an annual rainfall of less than 51cm. It tempts travelers with its large diversity of picturesque landscapes including the gorges of Lugard falls with water carved rocks.

Ranked among the largest game reserves in the World, this protected area with its undeveloped wilderness provides home to a number of wild animals.

Some of the common animals that roam around the park suburbs are antelopes, hippos, black rhino, buffalo, lions, herds of elephants, giraffes and multiple bird species.

Of all Parks, you should not miss Tsavo East National Park for exclusive camping, remarkable adventures and game circuits. Don’t miss the picture-perfect rock and cave paintings in the middle section of the park.

The scrub-covered hills in the southern part and the remote feel adds to the Park’s great game that attract thousands of tourists. If you are after best game viewing, it’s along the watercourses at the Kanderi swamp.

This swamp is not far from the main Voi gate. Lions are commonly spotted at the Aruba Dam. Other than that, there are more attractions in the Park such as Lugard falls, Mudanda rock and Yatta plateau.

How to get there.

It is about 325km from Nairobi and 250km from Mombasa up to Tsavo East in the south eastern part of Kenya. You can get there by road or plane. It is possible to drive from either Mombasa, Nairobi or connect from the nearby National Park like Lake Nakuru.

The distance from Lake Nakuru is 450km and it takes about seven and half hours to drive from Lake Nakuru up to Tsavo East National Park. Moreover several chartered flights are offered from available airstrips.

Attractions in the Park 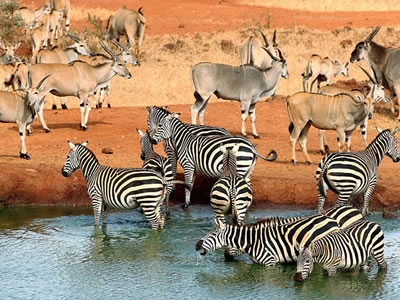 Tsavo East has three rivers. One of them is River Tsavo, it is located in the coast province and runs east from the western end of Tsavo West National Park just near the border of Tanzania. River Tsavo joins with Athi River to form the Galana River near the center of the Park.

Renowned for its huge expanse of the flat thorn bush, Yatta Plateau is a must see in Tsavo East. This natural wonder is the longest lava flowed plateau in the World. It is formed from the neighboring Ol Doinyo Sabuk Mountain. It stretches along the western boundary of Tsavo East National Park just above the Athi River. 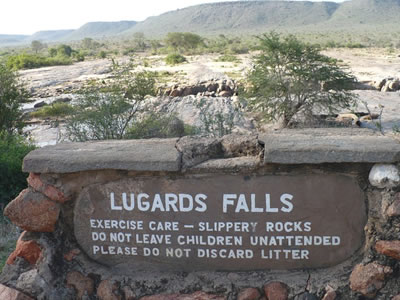 These falls are one of the prettiest in Kenya. It stretches with a series of white water cascades along the Galana River. As the river is carved and sculpted, some beautiful rocks are left where the waters flow to form these picturesque falls. The falls setting invites many aquatic species like hippopotamus, crocodiles together with wild animals such as buffalos, elephants and more.

Situated about 30km east of Voi gate, Aruba was put up across the Voi River in 1952. From this dam, you will see plenty of wild animals including cheetahs, pride of lions and species of water birds.

This is an ancient rock. It is composed of weathered Precambrian basement rocks and is aged between 570 -4550 million years.

This 1.6km Inselberg acts as a water catchment area that supplies a natural dam. Wild animals like leopards, elephants, buffalos and more come here to drink water during the dry season.

The wetland is in close proximity with Voi gate and it’s fed by the streaming waters of Voi River. This scenic spot is a great habitat to elephants, impala, antelopes, yellow baboons, lions and water birds. All these animals congregate in this area during the dry season to get some drinking water.

What to do in Tsavo East.

This activity takes you to different wildlife-rich spots within the Park. While on this drive through the wilderness, you will see many wild animals as they go about their daily activities in the Park’s lush habitats. Game drives are usually offered in a car with pop up roof. You can do a day or night game drive. Some of the animals to see include Impalas, gazelles, elephants, giraffes, zebras, wild boar, buffaloes and plenty of bird species.

With over 500 species of birds, Tsavo East National Park is a paradise for bird watching. This activity is feasible throughout the year and birders see several unique bird species including the migrant birds. 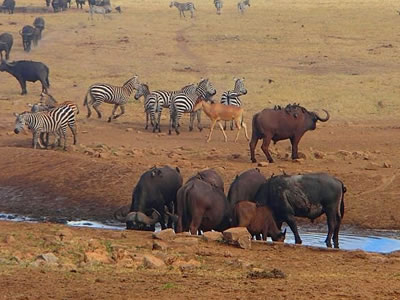 Other than on vehicle, you can explore the Park on foot and this is really a great experience. This guided walking safari is conducted between the picturesque landscapes and abundant Wildlife.

It also includes a walk on the world’s longest lava flow at the Yatta Plateau. The hike continues to the volcanic cones with scenic views of the crystal clear waters of the Mzima springs.

Our Safari Experts, dedicated small team of wildlife enthusiasts will give you the most out of your holiday and ensure a life safari tour experience in Africa. We would be delighted to organize your Rwanda safari Tour.